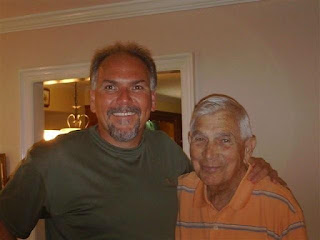 We all have people in our pasts who have impacted our lives greatly and whose influence has left ripples for generations to come! I got to join my husband recently as he spent time with just such a someone!

Tim has often shared stories with the kids and me of his days playing Little League, college and professional baseball. As you can well imagine, the years were filled with many coaches and some were more memorable than others. One coach whom Tim has always referred to as an influencer and a man from whom he learned a lot is Chase Riddle! It has been said that Chase Riddle has forgotten more baseball than many men ever knew in the first place! To say that he loves the game of baseball is an understatement.

Coach Riddle himself played professional baseball and he coached and scouted at the professional level. By the time he entered Tim's world, he was coaching at Troy State University in Troy, AL where Tim went to pursue his dream of playing pro ball! Coach's sun-weathered skin hinted at the Indian blood that coursed through his veins and the stains on his jersey were evidence that he had long ago embraced chewing tobacco as a viable pastime!

On the way back from a Florida vacation, our family had the opportunity to spend an hour with Coach and Mrs. Betty. It was a special time of rekindling old friendships and forging new ones. It was a chance for our children to glimpse back into their Daddy's past and see someone who helped shape him into the man he is today. Baseball stories abounded and there were more than a few laughs!

As we prepared to leave, Coach walked out to the car with us. It meant a lot, for he was still recouping from surgery a few weeks ago and even a short walk like that was sure to be tiring. He and Tim embraced one last time and Tim got in the car. No sooner had the door closed, than Coach was knocking on the window. He apparently had one last thing to say, and he had saved the best for last!

Coach Riddle, the one who had spoken life into the lives of so many, had a final admonition. He leaned into the car and with an urgent tone, gave Tim one last charge..."I see how close your family is and how much they mean to you! Hold them close and don't ever allow anything to become more important than the time you spend with them ~ not baseball or ministry!"

Thank you Coach and Mrs. Betty! Thank you for allowing us to spend time with you in your home and thank you for continuing to be influencers of others. Thank you for making relationships paramount to everything else and encouraging others to do the same! You have left your mark and we are forever grateful!
Posted by Barb at 7/28/2008 03:01:00 PM 6 comments:

Seriously, though, it is so hard to pour yourself out in service to others and then have them turn around and attack you or just cast you aside because they don't like something you have shared. My friend, Sunny, helped me so much recently because she reminded me something I have encouraged others with...if a person can discredit the messenger (you) then they don't have to receive the message you are sharing!!! My how I needed to be reminded of that!

That's not my light bulb moment, though, and it gets even better! :O)

Tim and I were watching The Bucket List the other night with Jack Nicholson and Morgan Freeman. It was really a very well done movie and was very moving at times. These 2 men have learned they are both terminally ill and their time on this earth is coming to a close. They decide to make a list of all the things they want to do before they die and they then set out to accomplish the list together.

At one point during the movie, Jack Nicholson has shared his painful past with Morgan Freeman and Morgan, soon after the telling, decides to intervene and devise a way to help Jack pick up the pieces of life with his daughter. Jack becomes irrate and says...

"Just because I shared my story with you doesn't mean I invited you to be a part of it!"

Instantly upon hearing that line, I felt a spiritual slap up side the head and a still, small Voice said, "That's why they get mad! They have shared their story (sometimes repeatedly), but they have never invited you to be a part of it!!" What freedom I experienced!!! It was if I was able to emotionally divorce the pain of the rejection because I suddenly understood the root of it!

Now don't get me wrong...it still stinks to give and give and give and then get shut out! No amount of realization can change that! I can now rest in the knowledge, though, that I haven't done anything wrong ~ except to maybe to care too much!!!

1 Thes. 2:1-20 (NASB-U) For you yourselves know, brethren, that our coming to you was not in vain, [2] but after we had already suffered and been mistreated in Philippi, as you know, we had the boldness in our God to speak to you the gospel of God amid much opposition. [3] For our exhortation does not come from error or impurity or by way of deceit; [4] but just as we have been approved by God to be entrusted with the gospel, so we speak, not as pleasing men, but God who examines our hearts. [5] For we never came with flattering speech, as you know, nor with a pretext for greed—God is witness— [6] nor did we seek glory from men, either from you or from others, even though as apostles of Christ we might have asserted our authority. [7] But we proved to be gentle among you, as a nursing mother tenderly cares for her own children. [8] Having so fond an affection for you, we were well-pleased to impart to you not only the gospel of God but also our own lives, because you had become very dear to us. [9] For you recall, brethren, our labor and hardship, how working night and day so as not to be a burden to any of you, we proclaimed to you the gospel of God. [10] You are witnesses, and so is God, how devoutly and uprightly and blamelessly we behaved toward you believers; [11] just as you know how we were exhorting and encouraging and imploring each one of you as a father would his own children, [12] so that you would walk in a manner worthy of the God who calls you into His own kingdom and glory. [13] For this reason we also constantly thank God that when you received the word of God which you heard from us, you accepted it not as the word of men, but for what it really is, the word of God, which also performs its work in you who believe. [14] For you, brethren, became imitators of the churches of God in Christ Jesus that are in Judea, for you also endured the same sufferings at the hands of your own countrymen, even as they did from the Jews, [15] who both killed the Lord Jesus and the prophets, and drove us out. They are not pleasing to God, but hostile to all men, [16] hindering us from speaking to the Gentiles so that they may be saved; with the result that they always fill up the measure of their sins. But wrath has come upon them to the utmost. [17] But we, brethren, having been taken away from you for a short while—in person, not in spirit—were all the more eager with great desire to see your face. [18] For we wanted to come to you—I, Paul, more than once—and yet Satan hindered us. [19] For who is our hope or joy or crown of exultation? Is it not even you, in the presence of our Lord Jesus at His coming? [20] For you are our glory and joy.

Thank you, Papa, for the assurance that you know my heart and my motives in ministering! Thank you that even when grace is not extended by others, You meet me with open arms! \O/