They Crack Me Up! 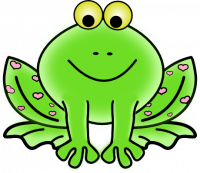 Hannah and Caleb found a frog today. Not my pet of choice, but they were thrilled and it was keeping them occupied and out of mischief so I was all for it! They built it a little home and got it all settled in. Lamar, the next door neighbour, told them it would need some bugs to eat and so they set off on their mission to find their new friend supper. They put their heads together and came up with a plan of action...

"Let's check all the windows in the house and find dead flies!"

For some reason that just cracked me up and I actually thought it was quite an ingenious idea. So off they went, container in hand, to collect all the dead bugs. It hadn't been long when I heard their exasperated tones and they announced, "There aren't ANY dead bugs in ANY of the windows!"

I snickered to myself, all the while patting myself on the back. I told Tim I guessed that meant my housekeeping rocks and I passed the impromptu let's-see-how-well-mom-does-when-it-comes-to-cleaning-out-the-windowsills test!!