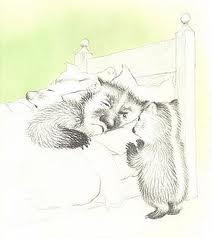 Tim taught on worry yesterday in church and it was so good. He shared that the definition of worry is to divide the mind or to strangle and knot up. None of those seems desirable yet worry is almost akin to a spiritual discipline for some.
One of our favourite books to read to our kids when they are little is Bedtime For Frances. Frances is a badger with a very vivid imagination. Frances is not a fan of bedtime and she finds many excuses to avoid actually laying down and going to sleep. One episode involves her being convinced there is a monster in the corner and she works herself into a tizzy. After being sent back to bed for the umpteenth time, Frances realizes that the monster that seemed so large is just actually her little bathrobe which has cast a shadow. Not much to actually be afraid of!!
One of the most powerful things that Tim shared yesterday (in my humble opinion ;O) ) was when he said that worry gives a small thing a big shadow! I loved that because it is so true. Worry causes us to take something that is often times not even a big issue and allow it to cast a much bigger shadow than it should be capable of casting. Even if it is a big issue in our lives, we can still be tempted to let it take on a life of its own by not reigning our minds in the way we should.
When you look at the true meaning of worry, it really does seem counter-productive. We are causing ourselves to have a divided mind and be strangled and tied up by worry instead of trusting that the Lord is in control and is taking care of us. We have to wrestle thru in our hearts and come to the conclusion that either He is trustworthy or he is not. It doesn't mean we're not ever going to have concerns or worrisome thoughts, but we can choose to not pitch a tent, make a fire and camp out in the midst of that worry.
Luke 12:25
And which of you by worrying can add a single hour to his life’s span?
Lord, I don't want to be a woman who allows worry and the cares of the world to define me. I don't want to allow a small thing to cast any big shadows in my life. May I choose to take my thoughts captive and filter everything thru the lens of your sovereignty and care. Help me not be found with a divided mind for then I shall be unstable in all my ways and that is truly no way to live. May I choose to live in the shadow of the cross rather than the shadow of my fears!!
Posted by Barb at 9/26/2011 07:11:00 AM