Not Another Fairy Tale...

I want to tell y'all a story. If I had to title it I would call it…The Little Boy Who Struggled to Read and the Mama Who Almost Despaired.

As you know, we homeschool and I am currently in my 20th year. I had successfully taught 4 children to read proficiently and was pretty confident in my abilities. Then along came #5 who struggled from Day 1 to even remember the alphabet and I suddenly found myself feeling like an unsuccessful newbie. What began when he was 4 would prove to be a long, frustrating, discouraging journey with not many glimpses of hope that we would ever have victory in this area.

My friend who homeschooled all of her children helped tutor him, but the struggle was still very real. There were numerous times, in order to preserve our relationship, that I would put it away and purpose in my heart to wait till both of us were a little more mentally and emotionally prepared. As each new year rolled around I would pull the reading books out with hopeful anticipation, only to find those hopes quickly buried amid a sea of still unrecognizable words.

How could a boy who was so smart (he is a grade ahead in math and could probably do his sister's math if he had to) have such a difficult time remembering even the 5 simple vowel sounds that he had been attempting to remember starting so many years before? What was I missing? How many different reading curriculums would we try before something clicked?

Fast forward to this school year. A year that again found me cautiously hopeful that my sweet boy, who feared being called on in small group because of his inability to read, would finally find himself able to decode the maze of jumbled letters. We started out a little slow, but there were definite signs of improvement. Then one day, all on his own, he brought me his Bible and started to read. It wasn't a fluid movement from word-to-word, but there he was…haltingly stringing word after word and verse after verse together until he had navigated a whole passage all on his own.

To say that there was great rejoicing would be an understatement!! The resulting celebration seemed to give my boy a bolstered confidence and he began to get excited about this whole new world that was opening up before him. He requested and received a new youth Bible and a devotional he could do on his own. We found him in various places in the house, head bowed and eyes focused while he gained momentum as well as skill.

That was a few weeks ago and he has improved in leaps and bounds. He offers to help read our lessons now, whether they be science, history or a word problem in math. He brought his Bible to me today and started reading in 1 John 2 and before he was done he had read the first 17 verses with only the need for help with a couple of fairly difficult words. Then his brother came home and he read the rest of the chapter to him. It did my heart such good to look at my big boy and my little boy, huddled together on the couch reading His words to us.

I wish I could say that this story wasn't fraught with many tears, angry words and insecurities on both our parts. I guess that's what keeps it from being a fairy tale. Fairy tales rarely paint a realistic picture of life, though. What I do know is that this story was filled with lots of love and second chances…for both of us. So head up weary Mama and listen to my words...you who have your own seemingly insurmountable mountain you've been circling for a long time...

It will get better!!!

We've all probably heard, many times over, that life is a marathon and not a sprint. There's so much truth in that, but it's hard to remember it on those days when a padded cell seems like our best option. Don't despair, though!! God knew what He was doing when He gave us these babies to raise. Trust me when I tell you that those days that seem to crawl along at a snail's pace pass really, really quickly when you string them all together!!

What you're doing really matters!!!! 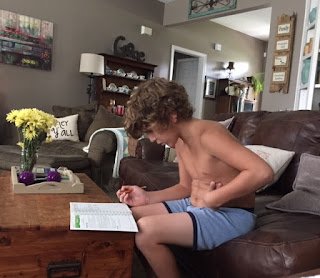 Galations 6:9 ~ "So let’s not get tired of doing what is good. At just the right time we will reap a harvest of blessing if we don’t give up."