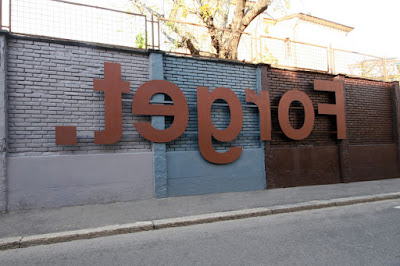 Proverbs 19:11 (MsgB)
Smart people know how to hold their tongue;
their grandeur is to forgive and forget.

I was talking to a friend the other day who is working through some relational struggles with a friend of hers and she said, "You know, the good thing about getting older and forgetful is that you forget who you're supposed to be holding a grudge against because you can't even remember what they did to you!" I cracked up when she said this because it is SO true.

Whether it is a case of old-age amnesia or just choosing to forgive and forget, it is always the right things to do. The benefits always have a lot more to do with our relationship with the Lord than it does with letting the offender off the hook. It is for our sakes that He encourages us to forgive and forget because He knows how capable we are of allowing bitterness to take root.

Philip. 3:13 (NASB)
Brethren, I do not regard myself as having laid hold of it yet; but one thing I do: forgetting what lies behind and reaching forward to what lies ahead,

I used to struggle with this verse a little because of the word "forgetting". My struggle was based on ignorance, though, because that verse does not imply the inability to remember, but rather literally means "no longer influenced or affected by". There is a big difference between the two, don't you think?

True forgetting is being able to remember what happened without becoming all knotted up inside and without needing to play out the video in its entirity. Would that I would be found faithful in this area of forgiving and forgetting!

Thank you, Lord for bringing to mind so many key verses in this walk that encourage us to remain unencumbered by grudges and unforgiveness. My hope is that I would always desire to keep the lines of communication open between us by my willingness to forgive and forget!
Posted by Barb at 2/04/2010 10:11:00 AM