When I was growing up, all I ever wanted to be was a wife and a Mama. The dream began to be fulfilled when Tim and I married and I became pregnant with Rachel. Then each time I found out I was pregnant I felt I was birthing that dream all over again!

While there was much excitement and anticipation associated with the pregnancies, there was also some restlessness and anxiety that caused some sleepless nights...a lot of sleepless nights, actually, because every night was multiplied by 5!! Restlessness because the dream was stretching me (literally ;O) ) and making me uncomfortable. Anxiety because I always wondered if I was equal to the task of taking on another huge responsibility even though I was thrilled to be expecting.

Well, I find myself in the birthing process again. Now before the rumours start, we are not expecting a baby, but rather the Lord has placed a dream in my heart and I find myself in the midst of the birthing process. As you can see by the time I am writing (almost midnight for this girl who normally turns into a pumpkin after 10pm), the stretching process is creating some restlessness, but it is an anticipation much the same as expecting...knowing that Papa is going to bless me beyond my wildest expectations once the dream has come to fruition.

While I was at She Speaks this weekend, it was amazing to learn some of the necessary tools to be as effective as possible in what I feel I am being led to do. Just the simple nuts and bolts of crafting a message makes the end result seem so attainable now...that end result being the effective communication of the depth of His love for us in a succinct and powerful way!!

I arrived at She Speaks knowing I was going to experience one of 2 responses while there. I was either going to go to all the seminars and listen to all the speakers and watch how they communicated and come to the conclusion I could never do that effectively myself...or I was going to take it all in and feel exhilarated at the possibility that this really was the direction He was leading!

I am sure you can probably guess the emotion that won out! While I know I shall never be equal to the task without His constant presence and direction in the process, I am excited that this restlessness is because I am embracing, nurturing and stewarding the dream He is growing inside me.

So I am going to nourish myself with His Word and wait for the labour pains to begin...

I also met a kindred spirit while I was there...Lucy from Memphis! What a special lady and what fun we had meeting! Here we are together. 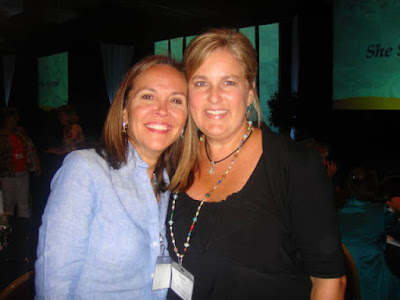